Skip to content
Some of the links in this post are affiliate links. This means if you click on the link and purchase the item, we may receive an affiliate commission at no extra cost to you.

It’s been some time since I’ve published the last review, but I am back and today I will be presenting my view of the Buck Knives 301 folding knife.

Folding pocket knives are without a doubt some of the most popular knives on the market. The Buck Knives company has been known to produce high-quality pocket knives with beautiful and functional design.

The Buck Knives 301 is a member of the Stockman family. Since I’ve never covered folding knives in my guides, let’s have a few words about the Stockman knives first.

The Stockman is one of the most iconic pocket knives, dating its enormous rise of popularity to the 17th century. The knife gained its name because it was very popular among ranchers and cowboys. One of the reasons why it became so popular was the fact that it was extremely versatile. The knife featured three blades, and, in the beginning, it was mainly used for spaying and neutering livestock. Over time, the main blade featured on the knife has slightly evolved and nowadays it comes equipped with a large clip point blade instead of a spear blade. The other two blades on the Stockman are a sheepsfoot blade and a spey blade.

A couple of decades ago, the knife was sort of a symbol of coolness and style and virtually every man carried it. Nowadays, while it’s not nearly as popular as it used to be, it’s still a good choice if you are looking for a versatile pocket knife.

With the theory aside, let’s look at the Buck Knives 301 Stockman itself.

The first thing you will likely notice is the large size of the knife. When closed, it measures 3 7/8 inches or about 10 cm if you prefer metric measurements. The design of the knife is as classic as it could be.

All three blades are made of 420HC stainless steel which is a good choice for such a workhorse of knives. The steel provides a good balance of durability, edge retention and it’s easy to sharpen. Let’s not forget that it is also quite rust-resistant.

The three blades provide great versatility allowing you to carry just one knife instead of three knives. This can be especially useful for camping or hunting trips. 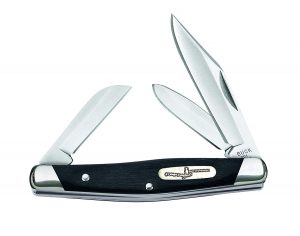 I guess it’s not necessary to say which version looks better. On the other hand, I would not immediately dismiss the plastic version because it could, at least in theory, offer better durability in wet conditions.

The rosewood version is usually slightly more expensive, however, the price difference between these two versions at the time of writing was mere two dollars.

As expected, the knife receives generally very positive reviews. Many of the customers praise the knife for its versatility and price-performance ratio. Some customers were happy to see the knife is made of the 420HC steel, making it corrosion resistant especially in the area that holds the closed blades. Also, the blades’ sharpness has been highly praised.

On the other hand, there were also some not so positive reviews. Some of them mentioned the knife they received had quite weak back springs making the customers worried the blade would be too easy to accidentally close during use and cut one’s fingers. However, this complaint doesn’t seem to appear often.

Overall, I think this is a very nice and versatile pocket knife that’s capable of handling many tasks out in the wild. It can also be a good choice for an everyday carry knife. The price is also reasonable, and the knife comes with a lifetime warranty. Oh, and it’s made in the USA unlike some of the other Buck Knives lines.