Contents at a glance

In today’s article, we will be looking at some of the best Cangshan knife sets on the market. We will look at knife block sets as well as smaller knife sets that come without a block as some people prefer to store their knives in a drawer.

Let’s get one thing out of our way right at the start – the knives are made in China. Therefore, if you are one of those who believe anything made in China is horrible, you can skip reading this and go get yourself a fancy J.A. Henckels set instead. Be prepared to pay much more though.

Cangshan is a Chinese company that shares the name with the beautiful Cangshan mountain range in the Yunnan province of Southern China. It’s also the name of a small city where the company founder was born and grew up.

We’ve chosen 6 knife sets at which we will look at a little closer in the next couple of paragraphs. 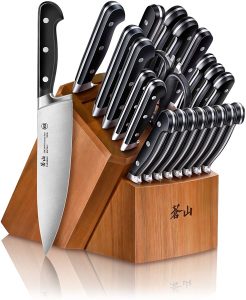 The Cangshan V2 Series 1024128 is an excellent knife set that includes 20 knives, shears, honing steel, and a knife block. The exact composition of knives can be found below:

The V2 series of Cangshan knives sport beautiful design while providing the functionality one would expect from premium knives. The knife block is made of acacia wood and is of beautiful reddish-brown color. There’s an engraved logo of Cangshan on the front of the block. Every block has a unique look to it thanks to handcrafting. The knives are certified by the National Sanitation Foundation.

The knife set has received generally very positive reviews from verified customers and currently ranks as one of the most popular knife sets on the market. Although most reviews have been positive so far, there were also some disappointed customers. Some of them have reported the wooden block arriving cracked and others mentioned rust spots appearing on the blades. The Cangshan knives are backed with a lifetime warranty for manufacturing defects, so if anything like that happens, the manufacturer should be contacted. 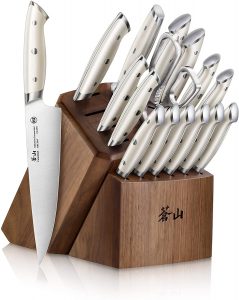 The Cangshan Z1 Series is a stunning looking knife line focusing on both function and looks. The handcrafted knives are full tang and feature handles which Cangshan calls bolsterless, but I would say they are, in fact, demi-bolstered. That makes them ideal candidates for those who prefer the pinch grip. If you don’t know what a pinch grip is, it is grip where you are pinching the blade between your index finger and thumb while your middle finger is tucked behind the finger guard. This allows more precise movements than regular handle grip and it’s best suited for larger knives such as the chef’s knives.

The knives are made of X50Cr15MoV imported German steel which is rated at HRC 58 +/- 2 on the Rockwell scale. The handles feel very nice in hand and feature three rivets. This specific knife set has white handles, however, should you wish to go for a more traditional look, there’s also a black version of the same set.

This is a 17-piece block set which includes the following the knives:

As the name of the product suggests, there’s also a wooden block included in the package. As one would expect from solid walnut wood  – it looks just gorgeous. Just as with the S1 series, this is a handcrafted block, and therefore no two blocks will look exactly the same.

Again, the knives are certified by the National Sanitation Foundation and are backed by a lifetime warranty against manufacturing defects.

The knife set has received very positive reviews from the customers with most of them praising the knives for excellent sharpness. 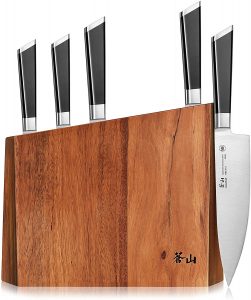 Not everyone requires 20 knives at hand for their cooking tasks. And that’s why I’ve included smaller knife sets in the list as well. Namely, the Cangshan Y2 Series 59212 set includes 5 knives and a wooden block. The National Sanitation Foundation certified knives are forged from the X50Cr15MoV steel rated at HRC 58 +/-2. Included in the set are an 8-inch chef’s knife, 7-inch Santoku knife, 8-inch bread knife, 5-inch serrated utility knife, and a 3.5-inch paring knife. I would perhaps swap the Santoku knife with a boning knife to achieve a more rounded selection but that’s me, your requirements may as well be different.

The handles of the knives are black and sport a not-so-traditional design. The cross-section of the handle looks sort of squarish and it gets slimmer towards the blade.

The acacia wood block has a simple slim design making it ideal for those who don’t want their block to occupy too much space. While the design is simple, it’s by no means ugly. In fact, it looks very good and the wood contrasts nicely with the sleek black and silver knives. One important thing to consider though – the slots in the block are upright and if you have a cabinet above your countertop, there’s a chance you won’t be able to pull out the knives without having to tilt the block sideways. 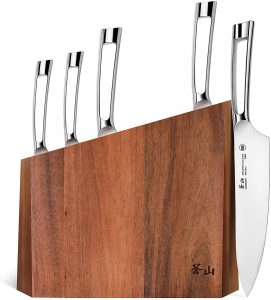 This is another 6-piece set from Cangshan that consists of 5 knives and a wooden block. The knives included in the set are as follows – an 8-inch chef’s knife, 7-inch Santoku knife, 8-inch bread knife, 5-inch serrated utility knife, and a 3.5-inch paring knife. Yes, the knife type selection is exactly the same as with the previously described Y2 series set. Also included is, of course, a wooden block made from acacia wood. Again, it is pretty much the same wooden block as with the Y2 series. So, what’s different then? Well, the knives sport a different design.

Cangshan chose the X50CrMoV15 German steel for the material of these knives. There’s no plastic or rubbery handle anywhere. Just metal. What’s kind of special, is the fact that the handles are hollowed out – like in – there’s a hole in them running from the demi-bolster all the way to the butt of the knife. It might look a little strange, but the knives felt well balanced and quite nice in hand.

All in all, a very nice knife set with a wooden block for a reasonable price.

The last 6-piece set we are going to look at is the W series 59960. It’s a set that comes with 5 different knives and a wooden block to hold the knives. The well-rounded knife selection comprises of an 8-inch chef’s knife, 8-inch carving knife, 8-inch bread knife, 5-inch serrated utility knife, and 3.5-inch paring. The carving knife is a knife you can – to some degree – use for the same tasks as a slicing knife. As mentioned before, I would like to have a boning knife in the set as well.

Just like other Cangshan products, the knives sport a very attractive design. Unlike the other knives we’ve mentioned in this guide, these have teak wood handles which are nicely accompanied with three brass rivets. The knives are bolster-less and might be a good choice for someone preferring the pinch grip approach to cutting and slicing. I’d never put a knife in a dishwasher, and wooden handles make it even more of a no-no situation. Handwash the knives and dry them before storing them.

The set is accompanied by a wooden block. It is made of solid walnut wood and has three round holes in its body which from the design point of view plays nicely with the three rivets on the knives’ handles. 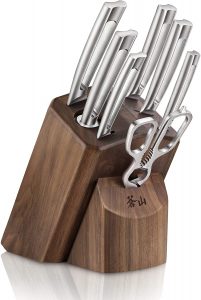 The knives have the exact same design those in the previously reviewed N1 series knife set. They all have a hollow handle. The honing steel sports the same handle as the knives. The difference between the N1 and TN1 series lies in the manufacturing material. While the N1 series uses the X50CrMoV15 steel, the TN1 instead uses the Swedish Sandvik 14C28N steel, which provides much better edge retention. On the flip side – this type of steel is more expensive.

The handcrafted walnut wood block looks gorgeous and has the traditional tilted design. This makes it easier to pull the knives out even when the block sits under a cabinet.

So this concludes our overview os some of the best Cangshan knife sets available on the market. Overall, these are pretty good sets with nice selections of knives. In general, most people are very happy with these, but as always with everything, some minor problems might show up. And that’s why the warranty is there.

If you are looking for other Chinese knife sets, check out our reviews of the Calphalon knives.